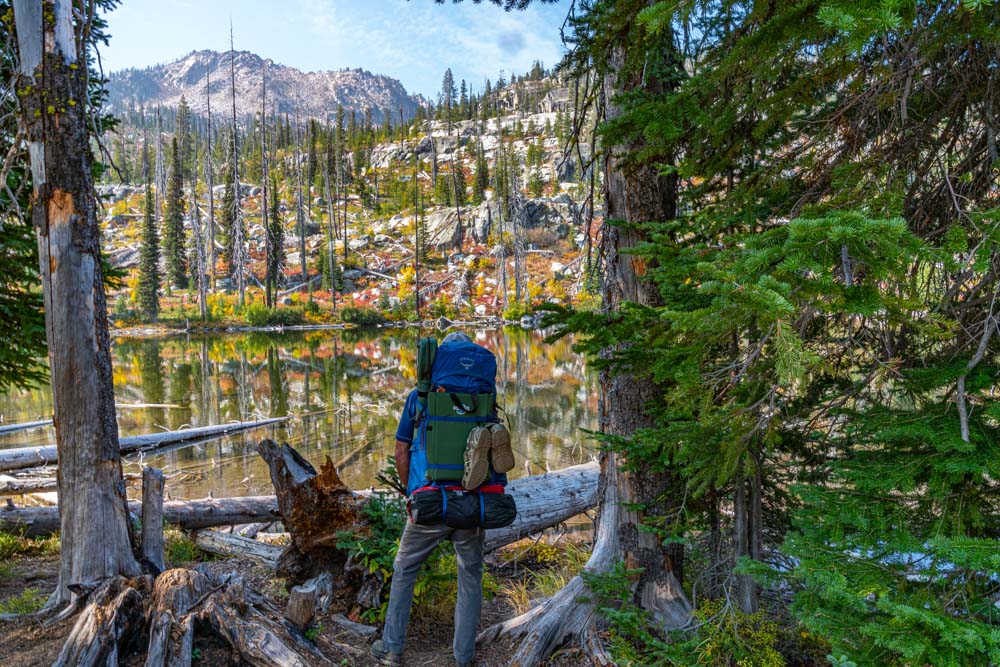 Tom, John, Ruby and I wanted to take advantage of our warmer than usual October temperatures to sneek in one more backpack for the season. We knew of a few remote lakes that might offer some good fishing so we saddled up and headed for base camp at Hee Lake. See John’s Trip Report here: http://www.splattski.com/2020/ho_kathys/index.html

Tom is taking in Duck Lake which was along the way. You might notice a weird smudge on the back of Tom’s Pack. That is actually not a smudge but was Tom’s new camouflage camp shoes with massage bumps on the shoe bed! One thing about camping with other people is that one is always checking out everyone else’s gear. Both John and I coveted Tom’s new camp shoes all weekend! Their only drawback was that if he left them in the grass along camp, we may never find them again.

After a goodly effort, we arrived at the top of Loon Saddle and looked down at our destination, Hee Lake about 700 vertical feet below. John was tied up in town with financial transactions so he had sent Tom and I ahead to set up camp then he and Ruby were following along later in the afternoon.

Tom and I arrived at camp with a nice leisurely pace expecting to have a couple hours to fart around then set up camp…….Apparently, John, getting that feeling one gets when they are off the back of the peloton, put the hammer down on the financial transaction, weaved his way through the team cars up Lick Creek Road, then traded pulls with Ruby all the way up the trail. Tom and I were just settling in for the cocktail hour when we heard a yell from the top of the ridge. We sprung into action setting up camp making it look like we had been there for hours…… A couple minutes later, Ruby dropped John like a hot rock on the decent and showed up in camp….. She was so happy to see Uncle Tom and Uncle Dave that she took a few victory laps even though she was racing for third place. John followed a few minutes later just off the podium.

Soon, it was on to the fishing portion of the adventure.

Followed by a little photography.

Just after sunset, the moon crested over the hill.

Our basin was bathed in moonlight, notice the stars above Humdinger Peak.

We gathered around the camp fire and enjoyed the peaceful evening.

Come back soon and follow our adventures for the next couple of days.