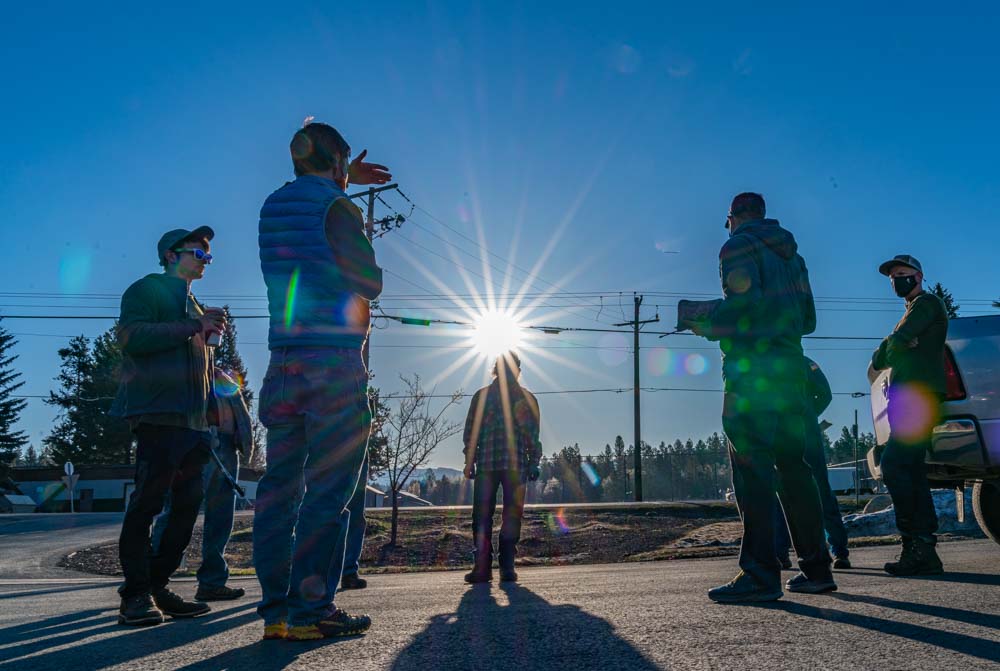 Last Sunday, I met up with 8 other hardy souls and left for a week long trail maintenance trip in the Frank Church Wilderness. This trip was organized by the Idaho Trails Association (ITA) in partnership with the Payette National Forest. These two organizations share a wonderful relationship which helps keep some of Idaho’s best trails open. Thank you to both the ITA and the Payette National forest for allowing this to happen. Below, we are gathered up at the Forest Service Offices prior to heading over to the McCall Airport for a mission briefing.

This Cessna 206 was our ride into the Frank Church Wilderness. We were scheduled to fly in on a Firefighting Otter but that larger plane was not available today, therefore, our team would require 3 separate trips to carry our gear and all 8 team members. I was lucky enough to be on fight #1. It’s about a 45 minute flight into the remote airstrip.

After flying over the still snow covered high Mountains of the McCall area, we dropped into the Cabin Creek Airstrip, a landing which is not for the faint of heart!

You are asking yourself, “I wonder what that landing looked like from the ground?”….. Voila!

This is Wes, our pilot. Wes is a true American hero as he was once a fighter pilot for the Air Force and now spends his time dropping hot shot fire fighters for the Forest Service! Thank you Wes for your service to our country!!

After Wes took off to get another load, Mark, Ian, and I headed down to the Forest Service Cabins which we were using as a base and cache for our return.

Each flight round trip took over 2 hours so we need to kill time waiting for the next groups. Ian first opted for a nap.

Then he found a guitar in the big cabin and we learned that he is an incredibly talented musician. Meanwhile, Mark was contemplating a trip to the “Library”.

I strolled over to the airstrip. It was a wonderful place to spend a few hours and I felt bad for the guys back in McCall waiting for the airplane to return.

Finally, about 4:00 in the afternoon, we had our full team together. We split into two groups, one headed down Big Creek and cleared trail to the Main Salmon River. My team (or should I say John’s team) headed upstream and worked to clear trail to Monument Bridge. It was only about 10 minutes from the airstrip that we needed to cross Cabin Creek. Off come the boots and into the ice cold water.

A view looking up Big Creek.

This view looks down Big Creek where the other team was headed.

About 6:00, we found a nice camp site and settled in for the evening.

Come back soon for Day Two of the Cabin Creek – Big Creek Expedition.